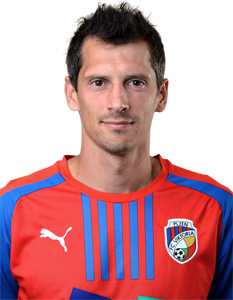 Marián Čišovský (born 2nd of November 1979, Humenné) is Slovakian football defender for FC Viktoria Plzeň. His position is a centre-back defender. Apart from Slovakia and Czech Republic he also played professional football in Romania. Marián is married and has three kids.

Marián has stopped playing football since March 2014 as he is currently suffering from amyotrophic lateral sclerosis.

Čišovský played for his home team Chemlon Humenné until 1999, when transferred to Inter Bratislava. While playing for Inter, he became champion of the Slovak league twice and also won the Slovak Cup twice. In 2004 he signed with MŠK Žilina. From 2006 to 2008 he played for Artmedia Bratislava, before leaving for Romania's FC Politehnica Timișoara. He suffered a 7 months injury and came back in 11 April 2010 and played 90 minutes against FC Ceahlăul. On 5 August 2010 he scored the qualification goal in 93rd minute against MyPa in Europa League making it 3–3. Čišovský scored one goal in 2–0 won against Oţelul Galaţi.

In 2011, he joined Czech club FC Viktoria Plzeň. On the 22nd of July 2011 he played the first half of the Czech Supercup final on the home stadium against Mladá Boleslav. Plzeň won the cup on penalties 4:2 (after 90 minutes the score was 1:1, there is no extra time in this cup final). Marián was substituted by František Rajtoral after the first half.

In 2012/2013 UEFA Europa League, FC Viktoria Plzeň was allocated into group B with Atlético Madrid, Hapoel Tel Aviv and Académica de Coimbra. In the Plzen´s first home game on the 20th of September 2012 against Portuguese team Académica de Coimbra Čišovský played all 90 minutes of the game. Plzeň won 3:1. Marián also played in the next away game against Atletico Madrid on the 4th of October 2012. Viktoria lost 1:0 when they conceded few minutes before the final whistle. On the 25th of October 2015 Plzeň travelled to Israel to clash with Hapoel Tel Aviv. Marián played the whole game and Plzeň won 2:1, which meant six points and second place behind Atlético Madrid. On the 8th of November 2012 Plzeň hosted Hapoel Tel Aviv and won 4:0, which resulted in the first place in the group for Plzeň. Čišovský played the whole game. On the 22nd of November he played another full game of Europa League in Portugal against Coimbra. In the 88th minute there was a contact between Marián and Edinh and the referee gave a penalty to the Portuguese side. Coimbra scored from that penalty and corrected the score to the final 1:1. However, this result secured Plzeň with promotion to the spring phase of UEFA Europa League. On the 6th of December 2012 Marián played last group game against Atletico Madrid and his team beat them home 1:0. Plzeň ended up on the first place of Group B with 13 points. In the knockout phase of the Europa League Plzeň faced SSC Neapol away on the 14th of February 2013. Marián started the game and Plzeň sensationally won 3:0. One week later in Plzeň City Čišovský played the whole game against Neapol again and they won 2:0, which advanced Plzeň into the round of sixteen, where they faced Turkish team Fenerbahce Istanbul. Plzeň lost for the first time of this Europa League at home (0:1) against the Turkish side. On the 14th of March in the second leg game against Fenerbahce Instanbul Plzeň drew and got knocked out of the UEFA Europa League. Marián played all 90 minutes of that last game in Europa League.

On the 17th of March 2013 Marián scored one goal against Dukla Praha and Plzeň won 4:0. In the last game of the season Plzeň beat FC Hradec Králové 3:0, sustained two points advantage and became the champion of the Czech Gambrinus Liga. Marián scored the last goal of the game. Sparta Praha, the biggest rival of Plzeň, came second.

In the first game of the second qualifying round of the Champions League Marián score one goal and Plzeň beat FK Zeljeznicar Sarajevo 4:3. He also scored twice in the next qualifying round in Estonia against JK Nomme Kalju on the 30th of July 2013. Plzeň dominated and won this game 4:0. In the Champions League playoff on the 20th of August he demonstrated his fine form again when he scored the first goal against NK Maribor. Plzeň beat NK Maribor 3:1. Marián was also important part of the team during the group stage of the Champions League. He played against Bayern Munich, Manchester City and CSKA Moscow.

On the 9th of November 2013 he scored the winning goal in a league game against FK Mladá Boleslav when after his solo he chipped it over the goalkeeper. Plzeň won 2:1. Marián signed a new contract on the 7th of February 2014 until the 30th of June 2016. However since the 1st of April 2014 he suffered from a knee injury and soon after that he started his fight with amyotrophic lateral sclerosis.

Marián was representing his country in the youth teams as well as in the senior team. In 2000 he was a member of the U21 team, which came 4th in EURO U21 in Slovakia. He scored one goal during the game against Turkey on the 27th of May 2000. His team won 2:1.

He was also member of a team competing at Olympic Games in Sydney, where Slovakia did not advance from the group stage.

Article has been taken over from the server wikipedia.cz